I love planes. I love airports, I love take-offs and landings, I love flying.

It might have started with my aunt – she was a flight attendant for Air New Zealand and sent us postcards from all over the world. Or it might have been my Dad’s love of airshows (I was that kid who begged everyone in the line-up for helicopter rides if I could sit in their lap because kids could ride for free with an adult.) Or it might have been our family excursions to the airport to watch the trainee pilots doing touch and goes.

When we came to Canada, I had a picture in my mind of what it would be like – mounties (thanks to Due South) and floatplanes (thanks to the season of MacGyver when he lived in a floating home in Coal Harbour). In reality, the only time I see mounties is at the Surrey International Writers’ Conference (it’s a tradition, he dresses in uniform every year). Floatplanes, on the other hand, are a part of the landscape in Victoria. And yet I’ve only been on one once – now twice!

A few weeks ago I had to go to Vancouver for a work meeting. I was dreading the usual ferry trip. It’s a 30-minute drive, 90-minute sailing, and another 30-minute drive, plus traffic and ferry waits. I don’t mind it when we’re in Ginger (the van) and on holiday, but it’s not so fun going there and back in a day. Then a colleague mentioned the option of taking a floatplane, and suddenly the trip didn’t seem like such a chore.

On the day of my big adventure, I arrived at the floatplane terminal, checked in, and pretended to be cool and jaded like the other passengers who frequent the Harbour Air flights. But my inner 10-year-old was bursting with the joy of it.

When I climbed aboard, the pilot asked if anyone would like to sit up front. Expecting everyone to be clamoring for the chance, I politely waited a couple of seconds (it’s a Canadian thing).

“If no one else is keen, I will!” I said. Forget trying to be cool.

A woman across the aisle smiled at me. “Go for it.”

And that, my friends, is how I found myself up-front with the pilot, wearing headphones and a grin as wide as the Strait of Juan de Fuca, on the trip of a lifetime.

The inside of the plane

Flying over the gulf islands

Passed by a twin otter

Flying over the Lions Gate Bridge

Coming in to “land”

When I was a kid, I spent a lot of time outside, racing my sister around the clothesline, and practicing cartwheels and handstands. But it never occurred to me to use grass as a musical instrument. I’d never heard of a grass trumpet until I saw it sitting proudly, number 25, on the bucket list.

Last Saturday, we had friends over for a picnic dinner on the front lawn. I say lawn, but it’s more of a meadow since it’s a month overdue for mowing, but that’s another story. Anyway, we were sitting on the grass enjoying the warm weather and good food, when my fine friend Gareth plucked some of our long, luscious grass and began to toot it like a horn. Ah ha! A grass trumpet!

To make a grass trumpet:

Hold the grass taut between your thumbs

Last month I read an article on the Globe and Mail website by Catherine McLean listing 50 things kids should do before they’re 12. And I realized I hadn’t done even half of them.

But it’s never too late, right? Want to join me and try some of these things yourself? If you do, let me know in the comments – kids of all ages welcome! 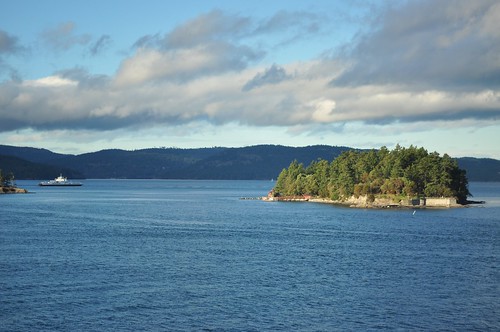 2. Roll down a really big hill

6. Run around in the rain

9. Eat an apple straight from a tree

12. Hunt for treasure on the beach

16. Bury someone in the sand

18. Balance on a fallen tree

21. Eat blackberries growing in the wild

26. Hunt for fossils and bones

29. Get behind a waterfall

30. Feed a bird from your hand

33. Catch a butterfly in a net

37. Check out the crazy creatures in a rock pool

38. Bring up a butterfly

44. Light a fire without matches

45. Find your way with a map and a compass